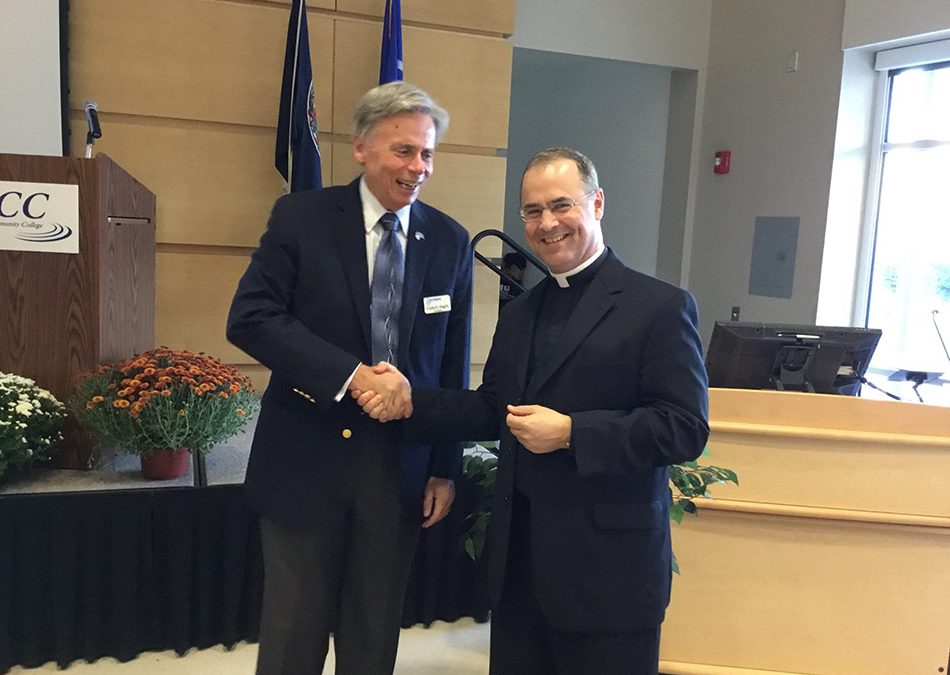 Sally Voth, For The Winchester Star

MIDDLETOWN — Family is what keeps the government from becoming too powerful, the Rev. Paul Scalia told those gathered for a New Eve Maternity Home fundraiser on Saturday night at Lord Fairfax Community College.

Scalia, a Catholic priest, is the son of the late U.S. Supreme Court Justice Antonin Scalia, who died in February. He is the bishop’s delegate for clergy in the Diocese of Arlington.

New Eve Maternity Home houses pregnant women and mothers who have nowhere else to go.

“That family is under attack is not really news,” Scalia told the roughly 250 people in attendance. “Those in power seem to assault the two most fundamental [unions] there are, namely, the union of a mother and child, and the union of man and woman. The question is why.”

“When [the state] goes beyond its proper boundaries, it then is in its interest to remove those limits because once the limits are gone, then there’s no barrier to the state’s power.”

Then the state can be the arbiter of everything, he said.

Rather than people then becoming more independent, they become more frightened and uncertain, leading to dependency upon the state, Scalia said.

“The most fundamental check on the state grasping for more power is the family, which existed prior to the state and stands apart from it. This is why [the family] is the greatest anarchy.”

After his father’s unexpected death, Scalia was asked by many for reassurance that “God actually knows what he’s doing in taking my father when he did.”

Antonin Scalia, who served on the Supreme Court from 1986 until his death, was known for espousing conservative jurisprudence and ideology.

“I would prefer that [God] chose another time, but I trust that God knows what he’s doing,” Scalia said.

“I don’t have the entire answer, but I can give a provisional one, I think, and that’s this: In the days between my father’s death and funeral, at least for many people in the nation, their attention was jerked away from politics and away from cultural wars to two very fundamental things, which is faith and family. That’s the basis of everything.”

He said the simplest acts make the greatest impact, building up society in a lasting way.

“This is a tiny budget, and they’re doing a lot with a little, and this is a great, great political act,” he said. “This is precisely what the Gospel really is all about.”

Joanne Seale, who founded the maternity home more than five years ago and serves as its manager, said Scalia’s presence drew the largest crowd the nonprofit group has had at its annual fundraiser.

“We exist in this time of easy access to abortion to give homeless, pregnant women the real choice that God puts in every mother’s heart, to bring her baby to birth in a safe and loving environment,” she said. “We have a lovely little home in Winchester.”

Three women currently live there, Seale said. Twenty-three women have lived in the home since it opened.

“Father Paul was my pastor in McLean for years,” Comstock said. “The Scalias are neighbors. I always love hearing him speak.

“One of the greatest joys of my life … [was] to watch Justice Scalia watch Paul [celebrate] Mass, or to see Paul watch his dad give a speech,” Comstock said. “They’re an extraordinary family.”

Discover independence and self-support in a stress-free home, supported by caring volunteers.

Call us today to receive the care you need from loving and supportive volunteers.

Provide a one time or recurring donation to help vulnerable mothers receive a second chance at a successful life.

Contact us today and join our mission to help single moms independently support their babies.

Special baby bottles are distributed at your church or organization to be filled with coins, cash or a check.